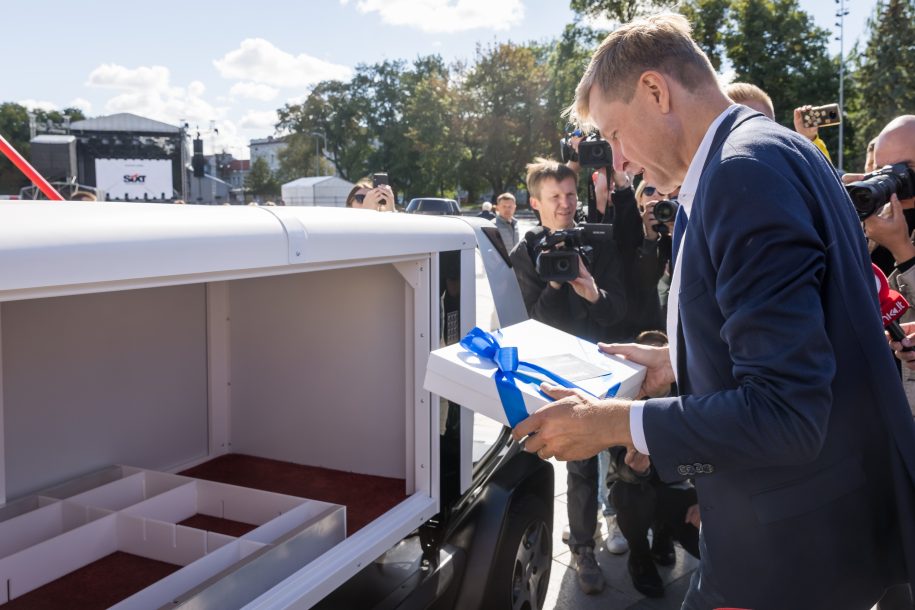 On Friday, the parcel of the Minister of Transport and Communications Marius Skuodis was delivered to the Mayor of the capital Remigijus Šimašius by an autonomous (self-driving) delivery car that circulated the streets of the capital for the first time. For this occasion, the innovative and environmentally friendly transport technology in Lithuania was launched by the Ministry of Transport and Communications together with the Estonian technology company ‘Clevon’.

The first demo trip of the self-driving car ‘CLEVON 1’ along the central streets of Vilnius lasted 10 minutes. The autonomous vehicle drove from the Ministry of Transport and Communications, located on Gediminas Avenue, to the Cathedral Square.

“The approach of innovative companies towards Lithuania as a reliable and promising partner proves once again that we have a voice in the international technology arena and we are interesting to the world. Self-driving couriers are especially relevant in the context of the Green Deal, as they are environmentally friendly and choose the most optimal route at the lowest energy consumption. Autonomous transport is not a vision of the future, but a current phenomenon in greener and more interconnected cities,” said Minister of Transport and Communications Marius Skuodis.

The historical trip of the self-driving delivery car has also become exceptionally symbolic. Minister of Transport and Communications M. Skuodis, using the service of the autonomous courier, sent an invitation for Mayor of Vilnius R. Šimašius to attend the Transport Innovation Forum 2022. The largest logistics and transport event in the Baltic States, organised by the Ministry of Transport and Communications together with the Association of Transport Innovations, will take place on 20 and 21 October. Not only autonomous transport, but electric mobility, green energy, decarbonisation and other topics relevant to the logistics sector will be discussed. Also, there will be an exhibition of innovations. ‘Clevon’ will also present its autonomous transport technology at the event.

“We care that everyone — pedestrians, cyclists, users of public transport, car-sharers and drivers of personal cars — moves smoothly through the streets of Vilnius. I am thrilled that Vilnius has become the first stop of this autonomous delivery car in Lithuania and I have no doubt that our streets will be convenient for this new technology,” said R. Šimašius at the ‘Clevon’ launch event.

Although autonomous transport is no longer a novelty in the global context, in 2017, ‘Clevon’ was one of the first in Europe to develop a technology that allows autonomous delivery transport to blend into everyday traffic on city streets.

“The Baltic States are our home, so it is only natural that one of the company’s missions is to make life-improving technologies more accessible to as many people as possible. Lithuania is an important strategic partner of ours and the arrival of ‘Clevon’ to the streets of Vilnius marks a new milestone for the technological partnership of these two States,” claims Sander Sebastian Agur, CEO of ‘Clevon’.

The third generation autonomous car ‘CLEVON 1’ is 2.5 m long, 1.6 m high and 1.1 wide. A fully charged battery enables the vehicle to drive 100 km. The electric robot can transport cargo of up to 150 kg at a time. Real-time data analysis technology and algorithms select the most optimal route for a self-driving car. A self-driving car is not completely autonomous. The latter is remotely monitored by a human operator who, if necessary, is able to take control of the vehicle.

After the launching and testing of this technological innovation in Lithuania, it can be seen that its application is very wide. But above all, it will be used by one of the retail chains for food delivery. Implementation of home delivery using autonomous cars in Vilnius will start in September.